My very last competition of the season: the European Youth Cup in Kranj. The Belgian team aboard of a plane and here we go!

Saturday was a day of getting up early and having a record-breaking speedy breakfast for me. We went to the climbing hall where I immediately began warming up for the first qualification route. After this I watched the demonstration by Maja Vidmar. The beginning of the route was quite tricky and I was very happy when I reached the final hard part of the route and managed to top out. My friend Celine Cuypers who climbs in female youth B, had the same route as me and climbed really well.

The second route was demonstrated by Klemen Becan. Chloé Caulier climbed before me and she topped out. She explained me the moves and holds of the route and after having warmed up again it was my turn. There was a difficult part in the middle and a strange volume, but I liked the route. I did the last move a bit too dynamic and I missed the hold, but I was very happy that I could go to the final.

It was great that Celine, Chloé, Loïc (male youth A) and Nicolas Collin (male youth B) were qualified as well! For Sébastien Berthe it was his last youth competition, but unfortunately he was ill during the week.

All the female age groups had the same final route, so we could discuss it together. There were some points which were not so clear for us, but it looked ok. I was very satisfied that I fell some moves before the top! Jessica Pilz (AUT) climbed after me and she fell at the same point. She became first because of the time rule, but she was already leading after the qualifications, so she really deserved to win. A lot of girls fell on a hard move in the middle and it is a pity that they had to be split up by their climbing time (especially for Andrea Pavlincova who was leading after the qualifications). I ended up 2nd and Ana Tiripa (GER) 3rd. I also won the European Youth Cup for this season which is really great!

Chloé was 9th and Nicolas 6th. Celine ended up 9th and she did very well in her first international year. Loic was again very strong by winning this competition and also the cup!

It was a nice competition with some great sight-seeing in Kranj and Ljubljana afterwards, which I really enjoyed.

I want to thank everyone for this season! My parents, coaches, sponsors and of course: all the friendly people I met again at the competitions this year! 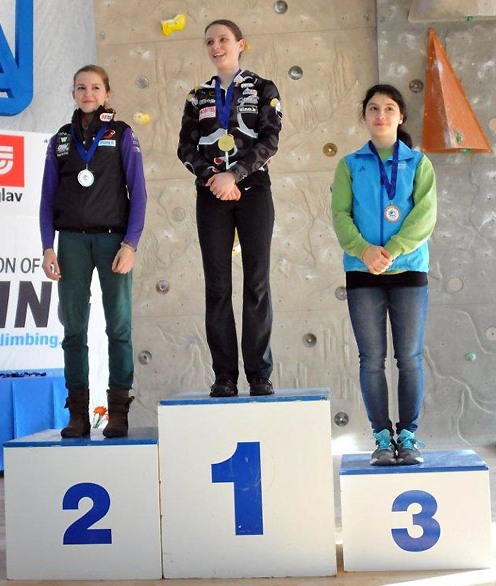