On Saturday 4 August the qualifications started with sunny weather. Chloé Caulier (female Youth A) from Belgium climbed super in the first route and explained me how it was. I was a bit nervous for the difficult, technical beginning but I could climb on to the overhanging part. I fell at the last move, but I was still happy that it had gone well. 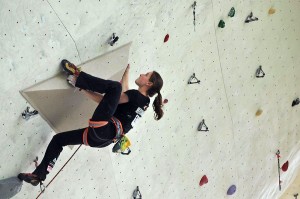 In the second route there were some hard moves at the end  (a big donut) where a lot of girls fell. The beginning went well and I could do the hard moves. But while making a heelhook to go to the tophold I hesitated and fell.

I got to the finals and so did Celine Cuypers (female Youth B), Chloé Caulier, Émilie Guérit (female Juniors), Loïc Timmermans (male Youth A) and Sébastien Berthe (male Juniors). We were with 6 Belgians in the finals! That is a record! 1 out of 10 finalists was a Belgian!

All the girls had the same final route. It looked difficult and the beginning of the overhanging part was hard to read. When it was our turn we were taken from the isolation to the climbing wall in a van. The final route went well and I could climb through the overhang. I fell in the last part (hold 58). I was super happy that it had gone so well. Jessica Pilz (AUT) climbed fantastic and topped the route! She was 1st, I became 2nd and Hannah Baehr (GER) 3rd. Chloé was 9th.

Celine climbed really well! She was tied on the 6th place, but because of the new European rule of time she became 7th because she was 2 seconds slower than Amoros Solène (FRA). It was Émilie’s first final! She climbed super well and became 5th! Loïc was 6th and Sébastien 8th. Belgium finished 4th on the teamranking! 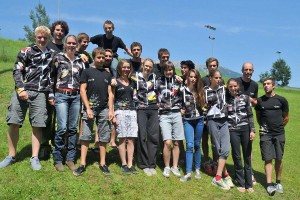