It was over so suddenly.
I did not have the chance to fight and give everything I had.
Why?
This remains a very big question mark.

Qualifiers were tough, much harder than I had expected, but I was able to top both the routes together with 5 other girls.

The semi-final route looked very risky in the beginning. While climbing I thought: This is one of the worst competition routes I have ever climbed. But the higher I got, the more relaxed I could climb. I felt so fresh in my forearms and although the last moves were really hard, I topped out! It was awesome. 🙂 And one of the happiest moments so far.

Finals would be the next evening, so there was a lot of time in between. But again, I experienced that I was not relaxed, but rather focused on what was to come. That would be good while climbing, but not when you are trying to fall asleep!

The finals became a sudden nightmare. I fell being still fresh and I almost couldn’t believe that it was over. Had I been too relaxed or maybe not focused enough? I don’t know. I really love to keep on going and to hold on as long as I can, but this was not what happened.
… as I was writing this post my father called me to have a look at the video, at the place where I fell. I saw that my right foot had slipped while doing the move…
I had no idea that this happened, only in a fraction of a second. Knowing this makes it a little easier to forgive myself!

I ended up on a dissapointing 6th place. I know that it is quite a good result, but I had really hoped to be on the podium.

The next day I woke up with a feeling as if I had been knocked-out in a boxing competition the day before. 😉 Mostly mentally.
People tell me that I have still a lot of years before me, but at the moment that doesn’t really count. I knew how hard I had trained for it and what would have been possible. But I hope to come out of it as a stronger person, even if this might take a lot of time.

Congratulations to Jain Kim with an amazing climb and a deserved gold medal! 🙂 Mina took the silver medal and Maggi the bronze. 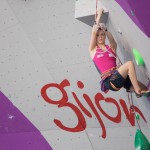 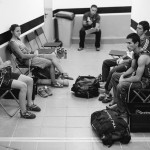